There is an important exception to the rule that each object of a class has its own copy of all the data members of the class. In certain cases, only one copy of a variable should be shared by all objects of a class. A static data member is used for such propose.. Such a variable represents “class-wide” information (i.e., a property of the class shared by all instances, not a property of a specific object of the class). The declaration of a static member begins with keyword static.

The following example demonstrates that static variables are common for all instances: 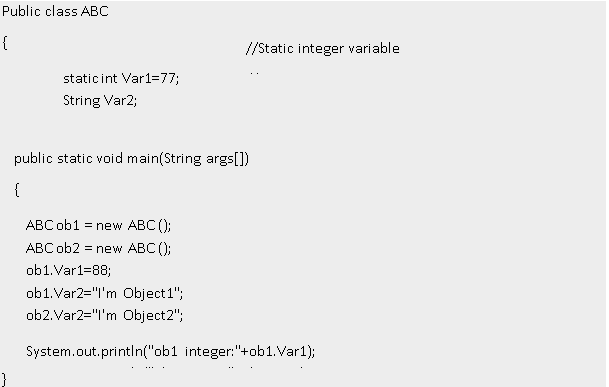 Create a SavingsAccount class. Use a static data member annualInterestRate to store the annual interest rate for each of the savers. Each member of the class contains a private data member savingsBalance indicating the amount the saver currently has on deposit. Provide member function calculateMonthlyInterest that calculates the monthly interest by multiplying the balance by annualInterestRate divided by 12; this interest should be added to savingsBalance.

Write a driver program to test class SavingsAccount. Instantiate two different objects of class SavingsAccount, saver1 and saver2, with balances of $2000.00 and $3000.00, respectively. Set the annualInterestRate to 3 percent. Then calculate the monthly interest and print the new balances for each of the savers.

Then set the annualInterestRate to 4 percent, calculate the next month’s interest and print the new balances for each of the savers.

Create a Calculator class that has following methods:

The user should be able to call these methods without creating an object of Calculator class.