In many other window systems, the user-interface components are arranged by using hardcoded pixel measurements. For example, put a button at location (10, 10) in the window using hard-coded pixel measurements, the user interface might look fine on one system but be unusable on another. Java’s layout managers provide a level of abstraction that automatically maps your user interface on all window systems.

Layout managers are set in containers using the SetLayout(aLayoutManager) method. For example, you can use the following statements to create an instance of XLayout and set it in a container: 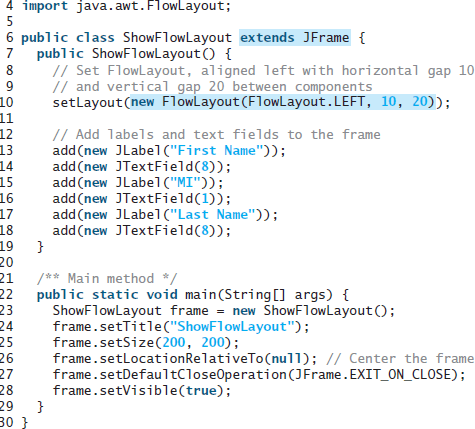 The GridLayout manager arranges components in a grid (matrix) formation. The components are placed in the grid from left to right, starting with the first row, then the second, and so on, in the order in which they are added. The class diagram for GridLayout is shown in Figure below. The BorderLayout manager divides a container into five areas: East, South, West, North, and Center. Components are added to a BorderLayout by using add(Component, index), where index is a constant as mentioned below:

The class diagram for BorderLayout is shown in Figure below:

Run the below code and ensure that the output matches the UI below the code. 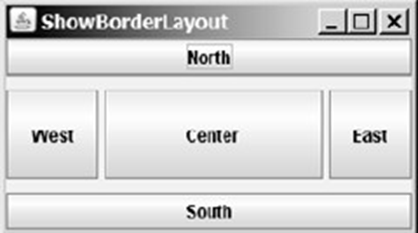 Suppose that you want to place ten buttons and a text field in a frame. The buttons are placed in grid formation, but the text field is placed on a separate row. It is difficult to achieve the desired look by placing all the components in a single container. With Java GUI programming, you can divide a window into panels. Panels act as subcontainers to group user-interface components.

Use the add(Component) method to add a component to the panel. For example, the following code creates a panel and adds a button to it:

Panels can be placed inside a frame or inside another panel. The following statement places panel p into frame f:

Run the below code and ensure that the output is similar to below: 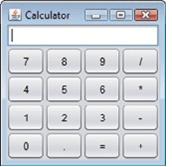 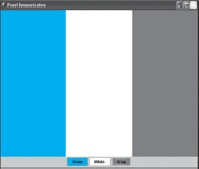 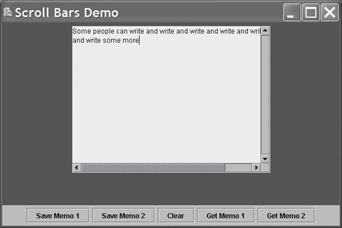 Note: Use JScrollPane class for the creating the scroll pane.